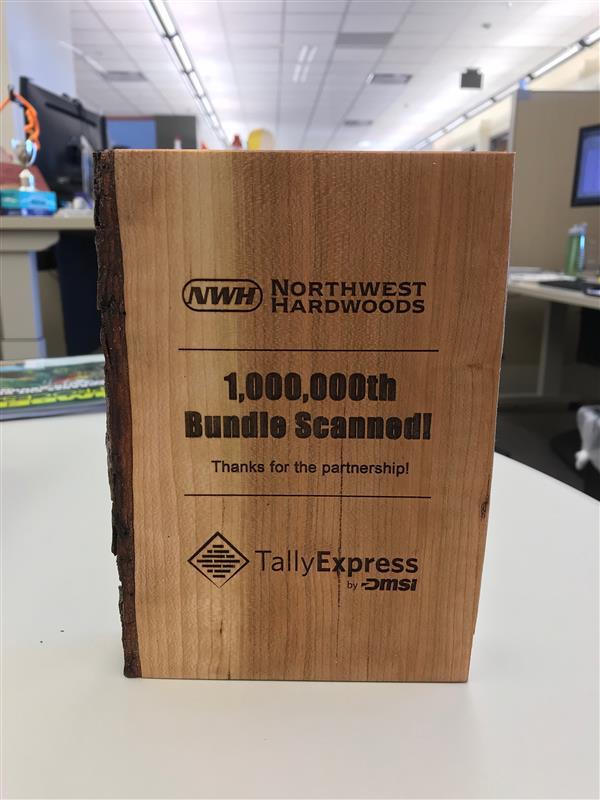 This October, Northwest Hardwoods flipped the odometer on a major milestone: scanning its one millionth bundle with TallyExpress.

TallyExpress, the app that captures hardwood end tallies in seconds by taking pictures with an Android smartphone, uses computer vision technology to measure each board in a bundle.

The one million milestone is a particularly meaningful moment for Northwest Hardwoods and DMSi because of how closely the two companies worked together to develop it.

“We really worked together to advance it.”

“It was a bit risky because when we reached out to Northwest Hardwoods to pitch them TallyExpress, the app was still in its adolescent phase. We really worked together to advance it,” said Henry German, Product Manager of TallyExpress at DMSi. “They bought into the vision we had for it and went out of their way to help develop it.  They. have brought it the credibility of volume it needed to roll out to the industry at large.”

“We pride ourselves on world-class quality and accurate grading. TallyExpress has allowed us to maintain high standards for tally accuracy while also significantly improving our efficiency,” said Wesley Bourland, Vice President of Manufacturing of Northwest Hardwoods. “It’s now an essential part of our workflow.”

While a small handful of single-location companies were already using the app, Northwest Hardwoods needed to be able to scale TallyExpress into at least 12 separate facilities.

“They’re a sophisticated operation and they pay attention to efficiencies,” said German. “There were things like width range parameters that needed to be flagged. We knew the technology had to do this but the folks at Northwest Hardwoods pushed us to develop it faster.”

To demonstrate proof of concept, Northwest Hardwoods first tested around 100 bundles and compared TallyExpress with other machine tally methods. They followed up this initial test with a three-month pilot, tallying over 5,000 bundles and performing weekly spot checks. The app was 99.5% accurate to a tape measure on the spot checks, with some sites seeing 99.9% accuracy. At that point, the lumber company was confident the app would work.

Developed by Fordaq, a technology company providing solutions to the global forestry and wood products industry, TallyExpress is now used in over 100 locations across the United States and Canada. It is available as both a standalone product and as an integrated component of Agility and eLIMBS, DMSi’s business software offerings from timber to consumer in the hardwood lumber market.